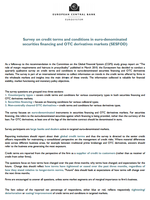 The recent financial crisis triggered a large-scale fiscal policy response in the euro area. In the policy debate, it is often argued that expansionary fiscal policies had a substantial impact on economic activity. So it is natural to ask how much did fiscal policy actually contribute to euro area real GDP growth during the crisis ?

In the wake of the financial crisis, fiscal multipliers have become once again the center of discussions within both academic and policy circles. Most of these discussions aimed at quantifying the size and the sensitivity of fiscal multipliers associated with the launch of large-scale fiscal stimulus packages. In this paper, and in contrast to previous studies, we provide an ex-post quantitative evaluation of the effectiveness of discretionary fiscal policies in influencing the euro area business cycle during the crisis. That is, on the basis of a growth accounting exercise we decompose the dynamics of real GDP growth in the euro area into fiscal and non-fiscal shocks over the period of 2007-10. To this end, we utilize an enhanced version of the ECB’s New Area-Wide Model for the euro area with a rich specification of the fiscal sector and employ time series for eight different fiscal variables. Our specification of the fiscal sector aims at balancing the need for a high degree of detail, which is necessary for conducting a meaningful quantitative analysis of the impact of fiscal policy on real GDP, and tractability, which allows us to identify the relevant economic mechanisms.

Our model-based estimates suggest that discretionary fiscal policies in the euro area led to an increase in annualized quarterly real GDP growth by up to 1.6 percentage points during the crisis. The detailed modeling of the fiscal sector and the incorporation of as many as eight time series that characterize fiscal policy appear pivotal for our finding.

That is, a baseline version of the model that has a rather stylized fiscal sector and that only measures one fiscal time series, namely government consumption, predicts a negligible role of discretionary fiscal policies for real GDP growth during the crisis.