Notification of UCITS and exchange of information between competent authorities 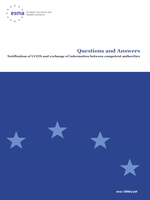 Notification of UCITS and exchange of information between competent authorities

The revised Undertakings for Collective Investment in Transferable Securities (UCITS) Directive puts in place a comprehensive framework for the regulation of harmonised investment funds within Europe.

The extensive requirements with which UCITS must comply are designed to ensure that these products can be sold on a cross-border basis. The most recent version of the Directive also introduces a management company passport.

The UCITS framework is made up of the following EU legislation :

ESMA’s predecessor (CESR) produced a series of questions and answers (Q&A) based on questions received through CESR’s MiFID Q&A mechanism. The Q&As reflected common positions agreed by CESR Members. They were one of the tools used by CESR to elaborate on the provisions of certain EU legislation, thereby fostering supervisory convergence, and were considered useful by external stakeholders.

ESMA has therefore decided to introduce a similar mechanism in the UCITS area.

Question 2: Amendments and updates of documents referred to in Article 93(2) of Directive 2009/65/EC

Question 4: Part A of the notification letter

Question 5: Exchange of information between competent authorities in the context of establishment of a branch of a UCITS management company