The ability to achieve political reforms in the eurozone 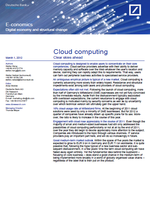 The ability to achieve political reforms in the eurozone

The reasons for the issues in the eurozone are long-term in nature. The current debt problems in the European Economic and Monetary Union (EMU) are only an indirect result of a cyclical crisis; instead, they revealed existing untoward developments.

Numerous reforms are needed. The image of the eurozone in 2012 and beyond will be determined by both fiscal austerity measures and structural reorganisation in other policy reas. The question is whether these undertakings can be implemented efficiently and sustainably.

Institutional and political framework conditions play a crucial role in determiningthe ability of eurozone countries to achieve reforms. The quality of government performance and administrative systems was below average particularly in southern European countries. This underperformance has consequences for the macroeconomic performance of these countries, impacting on factors such as the level of government debt and competitiveness. It appears that countries that are more capable of achieving reforms have greater macroeconomic stability.

The form of government in the countries has only a limited impact on the ability to achieve reforms. According to critical assesments neither centralised nor decentralised decision-making structures are per se more suitable for implementing reforms. The decisive factors are the number of political bodies within the reform process as well as their bargaining power